The lifespan of your laptop battery is very dependend on how you use it. Find some useful tips and tricks to extend the life of your Lenovo battery.

When charging a Lenovo battery, it doesn’t matter whether or not the ThinkPad is turned on. The charging process is controlled by the hardware rather than the operating system – or more precisely: The firmware of the Embedded Controllers (EC). Even without constant software intervention, the tresholds in the charging electronics remain stored and effective.

If you take out the Lenovo Battery and reuse it, many ThinkPad models lose the thresholds and the factory settings are drawn: Lower treshold = 96%/ Upper treshold = 100%.

How do you get to the settings?

Terms:
Charging area: The sector in which the device is charged
Charging treshold: The borders of the charging area.

Tips for each Lenovo battery:

How to store a Lenovo Battery?

If the battery isn’t needed for a long time, it should be stored cool with just over 50% charge. Don’t freeze the battery, refridgerator temperatures are enough. In addition, it’s recommended to use the battery approximately every 2-3 months while charging and discharging.

Rapid decrease of battery capacity after few charging circles can often be observed on ThinkPads of the model generation X220/T420 and so on.

Since being updated to version 3.75.0.0, the Lenovo Settings App allows to set a treshold for maximum battery charging. The treshold can be set in 5% increments between 40 and 100%

If the charging capacity of the battery used drops significantly (more than 5-7 Wh) below the intended capacity (design capacity), the battery can be recalibrated. Either with the help of the energy manager ot manually. “Dead” batteries with a very low charging capacity (10 of 84Wh) can be revived, but success is not a given. On top of that, some batteries were already rescued from “sham death” state and had more than 100% capacity afterwards (98 of 94Wh)

To manually bring the battery back to its full capacity, please take the following steps:

Note: If the battery has not recovered after 4-5 retries, or if the display values don’t show any improvements, it can be assumed that the battery can no longer be saved. At this point, a  new acquisition is necessary.

Note for Linux: Setting the charging tresholds and recalibrating is the easiest to do with TLP.

Tipp: After successfully recalibrating, it is advisable to set the following charging tresholds: 90%/94 (Start/Stop) -> Shutdown (see above) -> Turn the device on after a short break. This may result in slighlty shorter running time of the ThinkPad, but is very good for the battery and thus extends the lifespan.

For further help, the ThinkPad Forum member “Adun” is available.

Operation without battery on the power supply

If you use ThinkPads of the Generation T60/R60/X60 or newer on a 65W power supply without a battery, the processor does not reach its maximum clock frequency. The use of a 90W power adapter or the insertion of the battery provides a remedy.

That’s not a mistake, but intentional: Models with Intel graphics are usually delivered with 65W power supplies – a compromise in favor of a lower transport weight.

OEM batteries are very popular due to their lower prices. However, in most cases this is at the expense of quality and safety.

For example, there are cases in which safety equipment (e.g. electronics for switching off defective or deep-discharged cells) is left out. Often the OEM-Lenovo batteries have such a terrible quality that they no longer work after a few charging cycles.

Some users in the ThinkPad forum have discovered that you have to replace a replica battery up two twice to get a working one.

IBM and later Lenovo have started to put a stop to the use of OEM batteries  by no longer (correctly) detecting them and thus no longer charging them. This is partly reflected in corresponding notes in the energy manager. 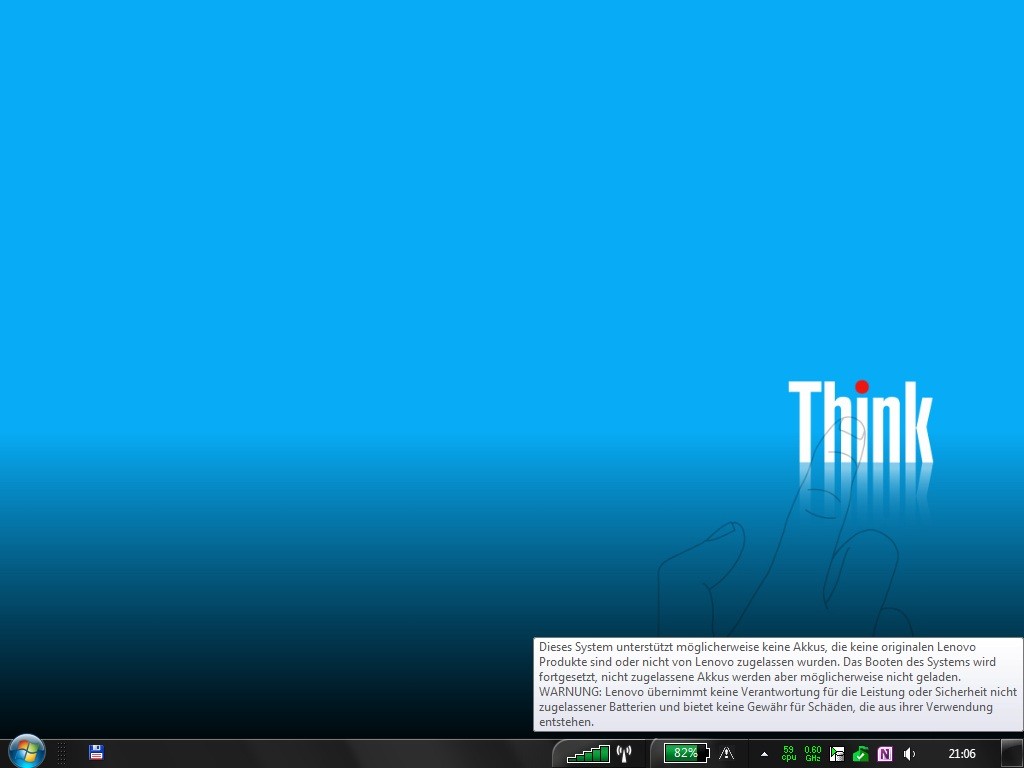 A Lenovo ThinkPad not correctly detecting the batterie

Locks are partially installed via BIOS updates but also in the Lenovo energy manager.

It’s relatively easy to recognize the locks in the changelog of the BIOS updates.

In the newest ThinkPad generations, this BIOS lock is supposedly available from the factory. Another problem is counterfeiting. Especially in the case of ThinkPad batteries, whose production is discontinued for more than two years, offers of replica batteries appear in the well-known auction houses, which are indistinguishable from the original Lenovo batteries in presentation and marking.

A general statement can’t be made here, as the authorized Lenovo dealers will no longer be able to offer original batteries from a certain point in time.

Defective and evaporated battery cell of an IBM Transnote

Link to Lenovo batteries at our IPC-Computer Shop